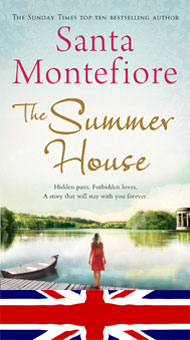 UK Edition of 'The Summer House' Out now 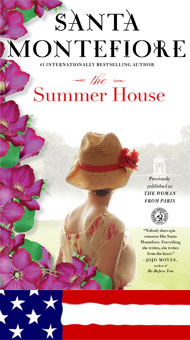 USA edition of 'The Summer House' Out June 2014 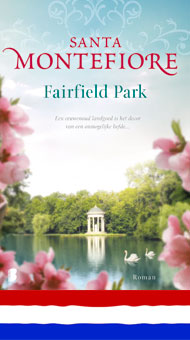 Dutch edition of 'The Summer House' Out now in paperback

The presence of a striking and mysterious blond woman among the mourners at Lord George Frampton’s funeral surprises his family. When the young woman, Phaedra Chancellor, reveals that she is in fact Lord Frampton’s daughter and that she has inherited the valuable Frampton suite of sapphires, surprise gives way to shock. But Phaedra’s effervescent nature soon wins over the Frampton family. Lady Antoinette Frampton finds in Phaedra the daughter she never had, while David, the new Lord Frampton, is utterly charmed as Phaedra manages to thaw the heart of Margaret, the Dowager Lady Frampton. But Roberta, the wife of Lord Frampton’s second son, is the only one not convinced and sets out to discover the truth about who Phaedra really is.

It’s always very hard thinking of a new book, when I’m still very attached to the one I’ve just finished. It’s a challenge to think of a plot and characters that grip me as much as the last ones did. I couldn’t write about Italy again. I had to give my readers something different. I have spent a lot of my life in Switzerland. My father’s mother was Swiss and as a family we’ve spent much of the winter there for as long as I can remember. As a child I used to long to go on hot holidays because every opportunity to go away was taken up with skiing. I can’t complain. I adore skiing and the beauty of the mountains give me as much pleasure as the Tuscan sea.

I based the novel in Hampshire, where I grew up, and the town is inspired by Alresford. A friend of mine has the most gorgeous Jacobean mansion just outside, in a village called Ropley, and I had been saying for some time that it would be the perfect place to set a novel. Of course I made it my own – I put a hill in and added a folly and set it on a farm, much like my father’s – so it’s a mixture of my own Jacobean home and the one belonging to my friend. That’s the wonderful thing about novels, one can invent absolutely anything!

The plot just came to me as I allowed my mind to wander. The best ideas seem to come either when I’m about to go to sleep, or driving. Sometimes, if I get stuck in the middle of a scene, I take myself off to bed. I feel a bit guilty going for a snooze in the middle of the day, after all, I’m not Spanish! But, I always come up with a good idea. Music does that to me, too. If I’m on a plane, I put my ear phones in and listen to inspiring music. More often than not by the time I land I have a good story, and sometimes, I’ve even been so moved by my own drama that I’ve made myself cry!

This is my second novel for Simon & Schuster and once again they have given me the most delicious cover. I hope the story inside lives up to the promise of the beautiful illustration!

While Tom greeted their father’s aunts, David settled his mother into the front pew. He glanced around the congregation. He recognized most of the faces – relations and friends dressed in black and looking uniformly sad. Then amidst all the grey, pallid faces, one bright, dewy one stood out like a ripe peach on a winter tree. She was staring straight at him, her astonishing grey eyes full of empathy. Transfixed, he gazed back. He took in the unruly cascade of blonde curls that tumbled over her shoulders, and the soft, creamy texture of her skin, and his heart stalled. It was as if a light had been switched on in the darkness of his soul. It didn’t seem appropriate to smile, but David wanted to, very much. So he pulled a resigned smile and she did the same, silently imparting sympathy for his loss.

‘Santa Montefiore really knows these people inside and out. I couldn’t put this book down.’
JULIAN FELLOWES creator of Downton Abbey

‘A charming tale’
Woman’s Own

What was your inspiration for The Woman from Paris? Did you begin with a specific character or plot idea?

I started with the house! I fell in love with a beautiful Jacobean house near where I live in the country, and worked the plot around it.

In the “Biography” section on your website, www.santamontefiore.co.uk, you write: “We have all had moments that we would give anything to live again.” What is one moment you wish you could relive?

Without doubt I would return to 1989 and relive the year I spent in Argentina as a 19 year old. Inspired by the beauty of the pampa and the colourful people I met there, I wrote Meet Me Under the Ombu Tree, my first novel. I still have loads of friends there and return when I can. In my heart I feel it is my second home!

Phaedra deceives the Frampton family in the hopes of protecting them from the truth. Do you think good intentions ever justify a lie?

I think lying is acceptable in certain circumstances, one of those being when the truth would cause terrible pain. The trouble is you always risk getting found out and being exposed! Perhaps if Phaedra had lied and disappeared afterwards, she might have got away with it. Her troubles began when she allowed herself to become part of the Frampton family and of course when she fell in love with David. There was no way it was all going to end well!

The novel stresses the necessity of forgiveness. Why did you want to emphasize this theme in The Woman from Paris? Do you find it easy to practice forgiveness in your own life?

I think forgiveness is the hardest thing to find in our hearts, and yet it is the only way to diffuse our suffering. By holding onto resentment we hold onto pain. When we truly forgive we allow love to burn away all negativity. Love frees us from suffering, but goodness, I’ve had times in my life where I knew the theory and yet, my heart remained as hard as stone. Sometimes, time is the only thing that softens the heart, which is why I think old people often make peace as they near the end of their lives. They grow wise and see the bigger picture.

…I no longer have my clothing line! If so, where is your favorite place to ski?

My favourite place to ski will always be Klosters in Switzerland, where I base the ski scenes in my novel. My great-grandmother, who was Swiss, used to go there with her family, way back, and her descendents have called it Home ever since!

Did you model the beautiful setting of Fairfield Park after a particular place?

Yes, I went to visit friends in Hampshire who have the most beautiful Jacobean house, set in spectacular grounds. I have always loved houses, especially old ones and I adore those summer houses built on hills or beside lakes, they’re very romantic. I used the house but made it my own as the real one is not positioned by a lake nor does it have a hill with an ornamental summer house (folly) on the top. The houses in my novels are characters too!

Your husband, Simon Sebag Montefiore, is also a successful, internationally best-selling author. Do you ever edit or read each other’s early drafts? How do you influence each other as writers?

Absolutely, we help each other all the time. We consider ourselves a business and share everything. He helps me with plots. Usually, I come up with the idea and then we sit over a bottle of wine discussing it and working out all the possible scenarios. It’s fun! I read the first draft of his novels, but not his history books. I can’t help with those. The novels I do feel qualified to critique. His new one, which comes out next year, is gripping and I really didn’t have to do much!

The Woman from Paris is your eleventh novel. Was there any element of writing this novel that differed from your previous novels? How you do you think you have grown as a writer from your first novel, Meet Me Under the Ombu Tree?

I think the key to success is loving what you do, whatever field you are in. I adore writing. I can’t look out of a window without feeling the urge to describe what I’m seeing. I think that enthusiasm is infectious. I have learnt a lot in the twenty years since I started writing my first novel, not only technically but from experience. The older I get the wiser I become and the better I understand human nature. Writing about characters is much more interesting if those characters are complex. I think plot is important and it’s fun to keep the reader guessing, but I think it’s well drawn characters that keep the reader coming back for more. Is this novel different from the others? I think every one is different, like children, but I love them all equally!

What was the last book you read?

Me Before You by Jojo Moyes. I found it moving, touching and funny. A very heavy subject told lightly.

What are you working on now?

I’m editing the one for next year. It’s based in Ireland and is a mystery, love story with lots of twists and turns. I have loved writing about Connemara, it’s very wild and romantic! I shall start my 14th novel straight after. 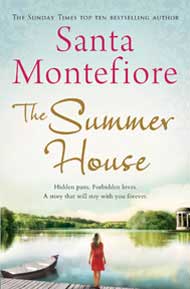 Buy the ‘The Summer House’ from Amazon

Buy the ‘The Summer House’ from CD WOW!