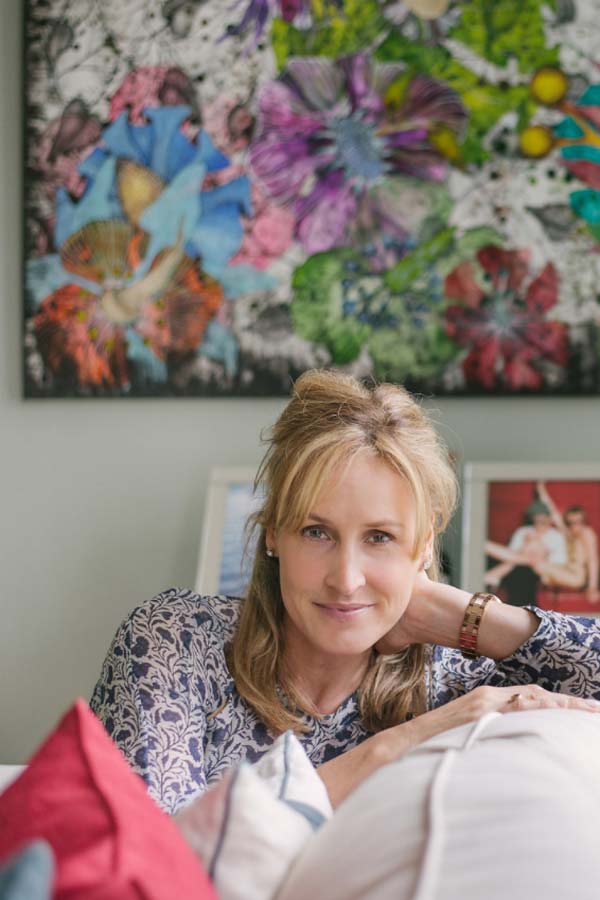 Born in England in 1970 Santa Montefiore grew up on a farm in Hampshire and was educated at Sherborne School for Girls. She read Spanish and Italian at Exeter University and spent much of the 90s in Buenos Aires, where her mother grew up. She converted to Judaism in 1998 and married historian Simon Sebag Montefiore in the Liberal Jewish Synagogue in London. They live with their two children, Lily and Sasha in London.

Since I was a child I always wanted to be a writer. I dabbled in books throughout my youth, from children’s stories to rather naïve love stories as I got older. From the age of 12 I went to Sherborne School for Girls, which was a boarding school. There I excelled in English, which was lucky because I certainly didn’t excel at much else except for sport and music! I wrote stories for my friends, imagining romances between them and the spotty youths they fancied at Sherborne Boys’ School. I transformed them into Rhett Butlers and set them in humid, mosquito infested jungles, which I considered extremely romantic, having never been in one. This seemed to satisfy them and I was in great demand to write more. Fancying myself a bit of a novelist, especially after a writer friend of my mother’s read one and suggested I send it to a publisher, I attempted a novel. With little experience of love and life it wasn’t a surprise when it was rejected. The trouble was I hadn’t yet found a good story. That came later, when I went to live in Argentina.

I was 19. My Anglo Argentine mother arranged for me to work on an estancia on the Argentine Pampa for a year, teaching English to three young children. This turned out to be one of the best things my parents ever did for me for I fell in love. Not with a polo playing Argentine, although I did have an innocent flirtation, but with the country. I lost my heart to those flat, humid plains and still, after 5 books, I have not managed to retrieve it. You see, Argentina is intoxicating. The countryside is rich with the scents of eucalyptus and gardenia, the sound of horses snorting in the fields or thundering up the polo pitch, birdsong and crickets resounding across the park. The houses, colonial in style, are painted white and yellow with dark green shutters to keep out the stifling summer heat, and surrounded by brightly coloured flowers and red tiled terraces upon which one can sit and stare out for miles over that vast plain. It is difficult to see where the sky begins and the earth ends, the horizon is simply mist. One feels very small. I spent a lot of time on a pony, riding to the neighbouring estancia for tea with friends, cutting across the plain, through the long grasses alive with prairie hares. Little by little I began to feel that I was a part of the place.

Buenos Aires is a city heavy with the sense of nostalgia. When the immigrants arrived from all over Europe, lured by the promise of rich pickings and new lives at the end of the 19th century, they recreated in the architecture echoes of their own homelands to stave off the inevitable homesickness. Thus, the Colón theatre is reminiscent of the Scala in Milan, the plazas of Madrid, the tall roofed buildings of Paris, the palm tree lined avenues of the South of France. Cafés spill out onto pavements where the waiters are all over sixty and one can sit in the shade and listen to the melancholy notes of the tango wafting on the breeze, thick with the scent of jasmine and diesel.

I left Argentina after a year, having belonged. The following year I returned during my university holiday to find, to my dismay, that I no longer fitted in. The young people I had hung out with had either gone to the US to study or had boyfriends or girlfriends and didn’t go down to the farm so much anymore, preferring to be in the city. I didn’t have a job, I was a tourist. I had nothing to get me up in the morning and the friends I had made in shops and cafés in the streets where I lived had moved on. I felt a sharp sense of alienation as if I was watching it all through a pane of glass where the year before I had been on the other side. It was a difficult time and I cried all the way home on the plane. However, I didn’t realise it then but I had my story.

We have all had moments that we would give anything to live again. However much we try, time cannot be reversed. It changes us and those we were once close to. My first novel, published in 2001, 12 years after my first trip to Argentina, was a wander down memory lane for me and hence very cathartic. I was able to channel all my feelings of nostalgia, regret and longing into a novel that seems to have struck a chord with many people. I get wonderful letters. I am grateful for every single one and thrilled that through that book I have managed to give people something special.